The Guardians of the Galaxy

"We'll split the treasure between us. Unless I find it first..."

Wielder of the Yaka Arrow and leader of The Ravagers, Yondu is a Premium Character you could first recruit to your academy during the Guardians of the Galaxy Event. His Introductory Quest is Treasure Hunter. His Mission Board Quests can be found here.

Yondu was never released for combat in Avengers Academy 2.0.

Yondu's Rank 1 outfit is his leather shirt, leather pants, leather boots and his leather wrist band on the right arm.

Yondu wants Star-Lord to fight the rest of the students at Avengers Academy.

Bucky once played a song that made all of Yondu's Ravagers cry.

Yondu in his escape pod
Add a photo to this gallery 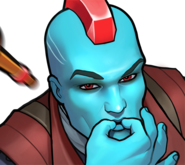 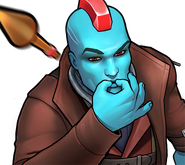 Yondu Rank 5
Add a photo to this gallery
Retrieved from "https://avengers-academy.fandom.com/wiki/Yondu?oldid=59277"
Community content is available under CC-BY-SA unless otherwise noted.