"Don't touch that! That's how I start every conversation."

A martial artist expert of Kamar-Taj, Wong is a character you could first recruit to your academy during the Marvel's Doctor Strange Event. His Recruitment Quest is Get Wong! His Mission Board Quests can be found here.

Wong was never released for combat in Avengers Academy 2.0.

Wong's Rank 3 outfit is a red tunic with blue sleeves, yellow piping, and a brown belt. He wears brown pants and gray shoes.

Wong's Rank 5 outfit is a red robe with gold embroidered trim over a long-sleeve blue shirt, a floor-length brown skirt, black shoes, and a brown obi.

Wong encourages Iron Man to reflect on why little things get him so worked up. Tony responds that there's a lot of things he tries not to think about.

Outfit Unlocked! Elemental Wong
Add a photo to this gallery 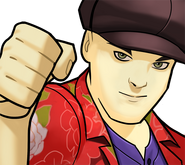 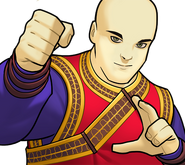 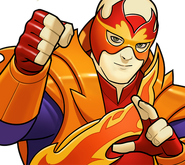 Elemental Wong
Add a photo to this gallery
Retrieved from "https://avengers-academy.fandom.com/wiki/Wong?oldid=58738"
Community content is available under CC-BY-SA unless otherwise noted.