Movie star super hero Wonder Man, civilian name Simon Williams, is a Premium Character you could first recruit to your academy during the Civil War Event. His Introductory Quest is Guest Appearance. His Mission Board Quests can be found here.

Wonder Man was never released for combat in Avengers Academy 2.0.

Wonder Man's Rank 1 outfit is a black, white, and red leisure suit top with a red ‘W’ on the back, with black cargo pants, red sunglasses clipped to his shirt, and red sneakers. He has black slicked back hair, glowing red eyes, and his hands glow pink.

Wonder Man's Rank 3 outfit is a black suit with a red belt, red bracers, and red and black boots. His arms glow pink.

Wonder Man's Rank 5 outfit is a black, sleeveless suit with red highlights, black and red bracers, black boots, and a red belt with a red 'W'. He's in his ionic form and his entire body glows pink.

Simon was the host of "America's Next Wonder". It is unknown if he had his ionic powers at this time. He also acted as Dracula in a movie.

Wonder Man was captured at an unknown time by HYDRA. He was held hostage and then later set free by the Academy Students. He joined the fight against HYDRA, and later became a full-time student.

Wonder Man is playing Captain America in an upcoming biopic.

Wonder Man asked Vision to create the soundtrack for one of his films. Vision refused, because Wonder Man wanted to pay him with autographed headshots.

Wonder Man Promotional Ad
Add a photo to this gallery 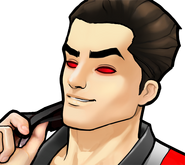 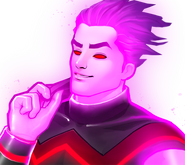 Wonder Man Rank 5
Add a photo to this gallery
Retrieved from "https://avengers-academy.fandom.com/wiki/Wonder_Man?oldid=59628"
Community content is available under CC-BY-SA unless otherwise noted.