"My past is a mystery. My music is a secret. I'll die searching for that one true thing..."

The Hydra's ex-assassin Winter Soldier, civilian name James Buchanan "Bucky" Barnes, is a character you could first recruit to your academy as early access during the Civil War Event. His Recruitment Quest was The Cold Soldier, Pt. 1. His Mission Board Quests can be found here.

Each time Winter Soldier is upgraded, his Power Level increases.

Winter Soldier's Rank 1 outfit is a grey and blue hoodie with a red star on the left shoulder, over a grey shirt with a white star, and ripped black jeans and sneakers. His metal arm is half-covered by his jacket sleeve.

Winter Soldier's Rank 3 outfit is a black, red, and blue jacket, with a dark blue shirt underneath. He has a brown utility belt, black pants, and combat boots. His metal arm is on full display.

Winter Soldier's Rank 5 outfit is a black, red, and grey jacket, with a black shirt underneath. On his right arm, his shoulder and forearm is padded by metal on top of the jacket and a fingerless glove. He wears a brown utility belt, brown thigh holster, and a brown leather harness. He has black pants with metal knee pads, and combat boots. His metal arm is on full display and he has smudged black war paint around his eyes.

James Buchanan Barnes was captured by Hydra during World War II. They wiped his mind, turning him into the assassin known as Winter Soldier, and the Red Skull programmed him to hate Captain America.

Adam suggests Bucky create a band with him. Bucky comes up with the band name 'Winter Warlock'.

Captain America was the Winter Soldier's best friend, prior to his assumed death and capture by Hydra. Currently, Bucky does not remember Steve, but Cap would do anything to get him back his memories.

Black Widow seems to show interest in the Winter Soldier, and he mentions that he finds her attractive.

Loki's nickname for the Winter Soldier is "Snowy Warrior".

Madame Hydra tried to convince the Winter Soldier to join Avengers Academy, but at the time, he refused.

Bucky once played a song that made all of Yondu's Ravagers cry. 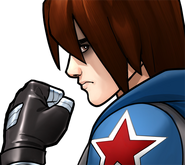 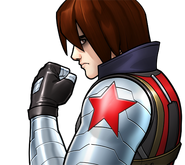 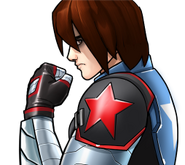 Winter Winter Soldier
Add a photo to this gallery
Retrieved from "https://avengers-academy.fandom.com/wiki/Winter_Soldier?oldid=59900"
Community content is available under CC-BY-SA unless otherwise noted.