A teenage magic user, Wiccan, civilian name William "Billy" Kaplan, is a character you could first recruit to your academy during the Young Avengers Mini-Event. His Recruitment Quest is Get Wiccan. His Mission Board Quests can be found here.

Each time Wiccan is upgraded, his Power Level increases.

Loki’s nickname for Wiccan is “Flipper”.

When Odin first met Wiccan, he made him a honorary Asgardian after Wiccan set his beard on fire.

Wiccan and Speed are twin brothers. Wiccan convinced the Avengers to break Speed out of the juvenile detention center.

Wiccan is voiced by JP Karliak

New Recruit Wiccan
Add a photo to this gallery 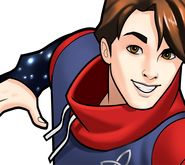 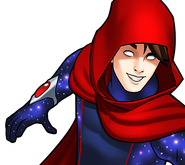 Wiccan Rank 5
Add a photo to this gallery
Retrieved from "https://avengers-academy.fandom.com/wiki/Wiccan?oldid=59629"
Community content is available under CC-BY-SA unless otherwise noted.