Whiplash, civilian name Anton Vanko, was first introduced as an antagonist, fighting for Crimson Dynamo. He could later be recruited to your academy after his defeat during the Armor Wars Event. His Recruitment Quest was Get Whiplash! His Mission Board Quests can be found here.

Whiplash was never released for combat in Avengers Academy 2.0.

Whiplash's Rank 3 outfit is an armored chestplate with an arc reactor, armored pants, and a silver mask. His left upper arm is armored, and he wears gauntlets on both forearms. His hair is bright green

Whiplash's Rank 5 outfit is his Mark ll armor.  It consists of silver, full body armor, including a helmet, and an arc reactor in the chestplate.  He wields two whips charged with electricity.

Iron Lad offers to help improve Whiplash's armor and weapons with tech from the future. He hopes Whiplash will forgive him for everything that his future self, Kang, does to him. He doesn't specify what exactly Kang does to Whiplash.

Whiplash held a grudge against Iron Man for the destruction of his village. The Iron Man armor used to destroy his village was hacked and out of Tony's control, but Whiplash still held him accountable because he built the armor. After forgiving Iron Man and joining the Academy, Iron Man helps Whiplash travel back in time and stop his father, Dr. Vanko, from selling weaponized arc reactors.

Mantis tries to invite Whiplash to the Academy "Green Hair Club" with She-Hulk, but he doesn't understand donuts or fist bumps.

Whiplash is voiced by Isaak Wells.

Whiplash arrives as a boss

New Challenger! Whiplash
Add a photo to this gallery 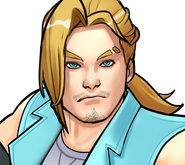 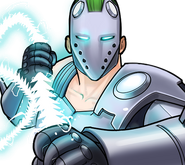 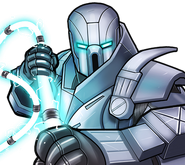 Whiplash Rank 5
Add a photo to this gallery
Retrieved from "https://avengers-academy.fandom.com/wiki/Whiplash?oldid=58753"
Community content is available under CC-BY-SA unless otherwise noted.