The Vulture, civilian name Adrian Toomes, is the primary antagonist in the Spider-Man: Homecoming Event. During the event, he sent Symbiotes, Carnage,and Silver Sable to battle the students.

Adrian wears an aviator jacket with a fur collar. He has mechanical talons and uses large wings, both made out of objects he found. His face is hidden behind a sinister helmet.

Before Adrian became the Vulture, he was betrayed by a friend. After that, he turned to a life of crime and developed the Vulture persona. When he tried to join the Midtown School of Science and Technology as a tech expert, he was rejected because of his history of tech theft.

Klaw worked for the Vulture during the Black Panther Event. Vulture gave him his Sonic Converter arm in exchange for vibranium.

Silver Sable pretends to work for Vulture in order to infiltrate his organization and find out who he's selling technology and weapons to.

Vulture kidnapped Spider-Girl from the Midtown School for Science computer lab. Later, after she joined the Avengers Academy, she hacked into Vulture's computer and researched his background before he became a criminal.

Yellowjacket bought technology and supplies from Vulture in order to defeat Iron Man and take Cross Technologies to the next level.

The Vulture describes his life to Spider-Girl.

Breaking News Vulture
Add a photo to this gallery 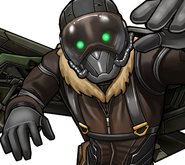 Add a photo to this gallery
Retrieved from "https://avengers-academy.fandom.com/wiki/Vulture?oldid=49566"
Community content is available under CC-BY-SA unless otherwise noted.