Another futuristic synthezoid, Viv is a character you could first recruit to your academy during the Ultron Revolution Special Event. Her Recruitment Quest is Get Viv! Her Mission Board Quests can be found here.

Viv was never released for combat in Avengers Academy 2.0.

Viv's Rank 1 outfit is a green t-shirt featuring two yellow triangles and a yellow diamond around the neckline, calf-length jeans, and black sneakers.

Viv leads a mission to Counter-Earth to investigate a distress signal, but it turns out to be a trap.

While Viv questions how to form friendships, Natasha advises her that it's important to be self-confident enough to be comfortable with or without friendships.

Tony and Viv bond over discussing their relationship with their fathers.

Viv recruits Nova to the Champions because he's brave, strong, and they need a space guy.

Vision is Viv's creator and father.

Viv is voiced by Ivy Dupler

Outfit Unlocked! Radical Viv
Add a photo to this gallery 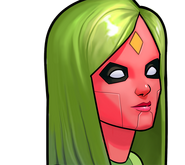 Radical Viv
Add a photo to this gallery
Retrieved from "https://avengers-academy.fandom.com/wiki/Viv?oldid=58336"
Community content is available under CC-BY-SA unless otherwise noted.