"I'm eager to test my limits, and kill it on the wheels of steel."

Futuristic synthezoid, Vision is a Premium Character you can recruit to your academy. His Introductory Quest is Creative Vision, Pt. 1. His Mission Board Quests can be found here.

Each time Vision is upgraded, his Power Level increases.

Vision's Rank 1 outfit is a yellow, hooded jacket over a green shirt with a yellow diamond in the center, green pants, and red sneakers.

During the Civil War event, Vision confides to Black Panther that even though Iron Man is arrogant and short-sighted, he is a true friend, and thus Vision is gladly in "Team Stark".

Vision asks J.A.R.V.I.S. about his phasing abilities when they realize that they have similar abilities. Vision suggests that they should form a barbershop quartet.

Loki's nickname for Vision is "Half-Man."

Vision and Wasp had a competition to see who's more fun. Later, Vision went on a date with her.

Wonder Man asked Vision to create the soundtrack for one of his films. Vision refused, because Wonder Man wanted to pay him with autographed headshots.

Yondu is a big fan of Vision's music. The two of them haven't interacted much but Vision was thrilled when Yondu told him that his music was big in space.

Vision is voiced by JP Karliak.

Vision Sale Ad
Add a photo to this gallery 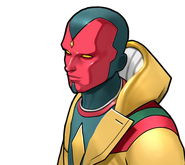 Original Vision
Add a photo to this gallery
Retrieved from "https://avengers-academy.fandom.com/wiki/Vision?oldid=58674"
Community content is available under CC-BY-SA unless otherwise noted.