Venom, civilian name Edward Charles Allan "Eddie" Brock, was first introduced as an antagonist, fighting with the Symbiotes. He could later be recruited to your academy after his defeat during the Spider-Man Event. His Recruitment Quest is Lethal Protector!. His Mission Board Quests can be found here.

Venom was never released for combat in Avengers Academy 2.0.

Venom's Rank 1 appearance is Eddie Brock in a black and white short sleeve shirt with the Venom symbol on it, blue jeans, and black and white sneakers. He wears a black fingerless glove on his right hand, and his left arm is partially transformed from the symbiote.

Venom's Rank 3 appearance is Eddie Brock wearing black and grey track pants, a black, long sleeve shirt with the Venom symbol on it, and black boots. The left side of his body is partially transformed from the symbiote.

Venom's Rank 5 outfit is a fully formed symbiote outfit. He's all black, with the white Venom Spider symbol on his chest.

Venom is at first confused over how both of them are Venom. Flash tells him to not think too much of it when questioned. They also appear to share the same Symbiote.

Carnage and Venom wanted to get revenge on Oscorp and defeat the Academy along with Spider-Man. However, after Venom decided to join the Academy, Carnage decided to try to finish the job himself.

Loki's nickname for Venom is Venison, or Eddie Venison.

Venom worked with Mysterio to get revenge on Oscorp and attack Avengers Academy.

Venom is voiced by Brian Stivale.

Venom arrives as a Boss Fight

Recruit Available Venom
Add a photo to this gallery 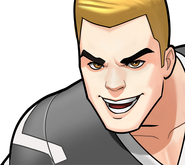 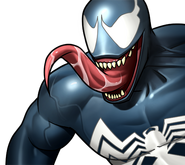 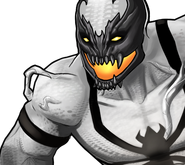 Anti-Venom
Add a photo to this gallery
Retrieved from "https://avengers-academy.fandom.com/wiki/Venom?oldid=59576"
Community content is available under CC-BY-SA unless otherwise noted.