"Sorry I'm late. I accidentally grabbed my spy phone instead of my normal phone, and tasered myself."

The superpowered super spy, Union Jack, civilian name Brian Falsworth, is a character you could first recruit to your academy during the British Invasion Event. His Recruitment Quest is See The World! His Mission Board Quests can be found here.

Union Jack was never released for combat in Avengers Academy 2.0.

Union Jack's Rank 1 outfit is a blue jacket with the British flag on the right over a light blue collared shirt with a striped blue and red tie, navy blue jeans with a brown belt, and brown shoes.

Union Jack's Rank 3 outfit is a British flag jacket, navy blue pants with a brown utility belt, and black boots with a Union Jack flag on the back of them. He also wears a blue hat, fingerless black gloves, and a communication earpiece on his left ear.

Black Widow and Union Jack have a good working relationship, what with both of them being spies. She's impressed by him for not trying to flirt with her like most other male characters in the game. According to him, she's not his type—he prefers men.

Union Jack invited Elsa to join the Braddock Academy, but she declined. He also helped her search for her brother, introducing her to the Legion of Monsters, a benevolent group, that claimed to know where her brother was being kept.

Loki's nickname for Union Jack is "Flag Man". They seem to get along well, as Union Jack tends to respond good-naturedly to Loki's sarcasm. Loki even invites him for a celebratory dance after breaking the curse on Black Knight. He remarks afterwards that Loki likes him, which Loki vehemently denies but Union Jack insists anyways, and even flirts with him a little. 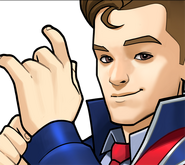 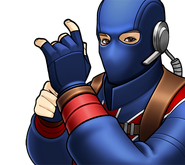 Union Jack Rank 5
Add a photo to this gallery
Retrieved from "https://avengers-academy.fandom.com/wiki/Union_Jack?oldid=58767"
Community content is available under CC-BY-SA unless otherwise noted.