"I realize now that we're all the same. Actually, I take that back. I'm still a little bit better."

A robot that defied his programming, Ultron was first introduced as an antagonist. He could later be recruited to your academy after his defeat during the Ultron Revolution Special Event. His Recruitment Quest is Get Ultron! His Mission Board Quests can be found here.

Ultron was never released for combat in Avengers Academy 2.0.

Ultron was created by Tony Stark and activated by Hank Pym to lead the other sentient Robots at the Academy and be a peacekeeping force for mankind. He started noticing flaws in mankind and decided that the only way to save Earth was to eradicate Humans. After being beaten by the Avengers, he realized the error of his ways and joined Avengers Academy.

Ultron's Rank 1 appearance is a slightly more armored version of the standard Stark robot, with a closed mouth and more rectangular eyes which are slanted in a way that gives him permanent "angry eyes". His midsection is completely covered instead of the exposed spinal chassis and there are various red lights on his chest, elbows, abdomen, upper thighs, knees and ankles.

Ultron's Rank 3 appearance is thicker and more heavily armored than Rank 1. His armored plating features more detailed line-work on his shoulders, arms, torso, and legs. The light details now include a line all the way around his head, more lights accentuating his chest, arms, knees, and calves.

Ultron's Rank 5 appearance is slightly larger than Rank 3. His mouth is now open, and his cheek spikes reach his chin and the back of his head. His shoulders now have an indented panel, and there are more plates on his thighs and torso. Red lights were added to his shoulders, legs, neck, and chest. He appears to have a red arc reactor, as well.

Ultron and Hank Pym discovered the suit that became Elektra's Virtual Elektra outfit during their explorations of the multiverse.

Ultron and Hank Pym embarked on extended explorations of the multiverse together. During one trip, they discovered the suit that became Elektra's Virtual Elektra outfit.

Ultron was furious at Iron Lad's treatment of his minions when he used Growth Pollen to make them giants.

Iron Man designed and created Ultron to lead his army of dummies.

Ultron built Jocasta and programmed her with Janet's personality. Jocasta abandoned him to join the Avengers.

Loki's nickname for Ultron is "Oldthong".

When Ultron suffered from depression, M.O.D.O.K. helped him find ways to cheer up.

Ultron was voiced by Adrian Pasdar.

Ultron arrives as a Boss Fight.

Ultron Armor Wars Ad
Add a photo to this gallery 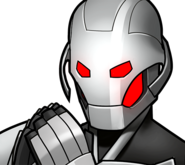 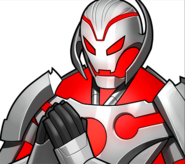 Gold Ultron
Add a photo to this gallery
Retrieved from "https://avengers-academy.fandom.com/wiki/Ultron?oldid=58425"
Community content is available under CC-BY-SA unless otherwise noted.