Triton is a Premium Character you could first recruit to your Academy during the Inhumans Event. His Recruitment Quest is Get Triton! His Mission Board Quests can be found here.

Triton was never released for combat in Avengers Academy 2.0.

Triton's Rank 3 appearance is a wet-suit. The shoulders and short sleeves of the suit are white, the torso is purple, and the legs are black, with purple and grey stripes at the knees and calves. He also wears a shell necklace, purple bracers, and purple swim shoes.

Triton's Rank 5 appearance is a purple and black wet-suit. The torso is purple, and the legs are ribbed with purple and grey piping. He also wears a silver utility belt, purple wrist guards, a silver oxygen mask, and purple boots.

Triton tried to diplomatically convince Attuma to give him the Terrigen crystals the Lemurians possess. When Attuma refused, Triton led a team to defeat him.

Triton is voiced by Eric Thomure.

Triton Ad
Add a photo to this gallery 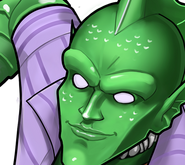 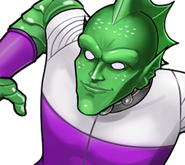 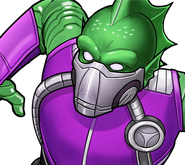 Triton Rank 5
Add a photo to this gallery
Retrieved from "https://avengers-academy.fandom.com/wiki/Triton?oldid=58434"
Community content is available under CC-BY-SA unless otherwise noted.