Transformed by a witch and the power of Mjolnir, Throg, civilian name Simon Walterson, is a character you could first recruit to your academy during the Pet Avengers Event. His Recruitment Quest is Get the Mighty Throg! His Mission Board Quests can be found here.

Throg was never released for combat in Avengers Academy 2.0.

Throg's Rank 1 appearance is a leotard with a white torso, red mid-length sleeves, black tights and an orange 'T' symbol on his chest.

Simon used to be a professional football player. When he wasn't able to pay a witch for her services, she transformed him into a frog as punishment. After adjusting to the change, Simon's grateful for the transformation. It gave him a chance to start over again, and leave his tragic past behind.

Jane Foster made first contact with Throg, through Thor Corps, before he came to the Academy.

Throg is voiced by Renwick Allen-McDowell

New Recruit Throg
Add a photo to this gallery 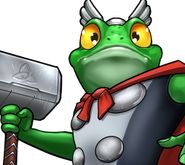 Throg Rank 5
Add a photo to this gallery
Retrieved from "https://avengers-academy.fandom.com/wiki/Throg?oldid=57983"
Community content is available under CC-BY-SA unless otherwise noted.