"The city is dark, but lightning shall light our way."

Thor Noir was first introduced as an antagonist, fighting for Maestro. He could later be recruited to your academy after his defeat during the Multiverse Special Event. His Recruitment Quest is Get Thor Noir! His Mission Board Quests can be found here.

Thor Noir was never released for combat in Avengers Academy 2.0.

Thor Noir's Rank 3 appearance is a black vest over a gray button-up shirt with a red tie, blue pants, black shoes, and a black newsie cap.

Thor Noir's Rank 5 appearance is a black suit with a red tie and black shoes. He wears a black fedora with small white wings on it.

Maestro convinces Thor Noir to be his enforcer by telling him lies that the Avengers Academy students are abusing their power.

Thor Noir and Punisher bond over pursuing their own brand of vigilante justice.

Thor Noir is voiced by ??

Thor Noir as a boss fight

Thor Noir Rank 5
Add a photo to this gallery 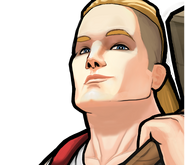 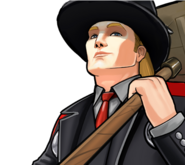 Thor Noir Rank 5
Add a photo to this gallery
Retrieved from "https://avengers-academy.fandom.com/wiki/Thor_Noir?oldid=58316"
Community content is available under CC-BY-SA unless otherwise noted.