"Hear this, Midgardian! Together we will protect the Nine Realms from the forces of evil, followed by a celebration with many nachos!"

The God of Thunder, Thor was first available for early unlock with Shards or could be recruited during Thor: Ragnarok Event. He hails from Asgard and is the son of Odin and the brother of the God of Mischief, Loki. He wields a thunder striking hammer named Mjolnir. His early access recruitment quest is Bring the Thunder! His recruitment quest is Get Thor! His Mission Board Quests can be found here.

Each time Thor is upgraded, he gives +10% on Mission Board Quests.

Thor's Rank 1 outfit is a blue sweatpants & jacket combo. His jacket has 6 gigantic silver buttons on it, mimicking his final outfit. He has grey and yellow tennis shoes.

Thor's Rank 5 outfit consists of a full armor. He also now has a winged helmet & cape.

Loki is Thor's adopted brother. Loki is always seeking to best Thor and prove that he's more suited for the throne.

Wasp and Thor took a great liking to each other and even go out on a date. Thor once lost a hot dog eating contest with Hercules and Wasp. Wasp won.

Thor is voiced by Colton Haynes.

Thor Lightning Deal
Add a photo to this gallery 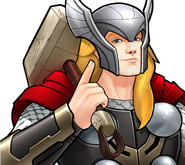 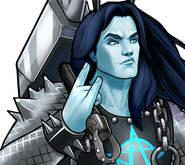 Gladiator Thor
Add a photo to this gallery
Retrieved from "https://avengers-academy.fandom.com/wiki/Thor?oldid=44101"
Community content is available under CC-BY-SA unless otherwise noted.