Hela, along with some new friends, aims to bring Hel to Earth. Some fresh faces and familiar allies—cast out of Asgard by Hela’s conquest—come to the Academy to help our heroes battle the sorceress and put an end to Ragnarok before it consumes their home.

How To Play Edit

There were no bonus decorations for this event.

Complete these challenges to earn the Valkyrie Bobblehead and 100 Infinity Shards! 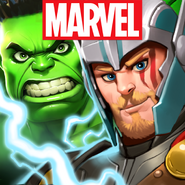 Application Icon
Add a photo to this gallery
Retrieved from "https://avengers-academy.fandom.com/wiki/Thor:_Ragnarok_Event?oldid=46049"
Community content is available under CC-BY-SA unless otherwise noted.