Scientist turned Spider-Foe, The Lizard, formerly known as Dr. Curtis "Curt" Connors, was first introduced as an antagonist, fighting with the Sinister Six. He could later be recruited to your academy after his defeat during the Spider-Man Event. His Introductory Quest is He'sss Not a Monssster! His Mission Board Quests can be found here.

Each time the Lizard is upgraded, his Power Level increases.

The Lizard's Rank 1 outfit is mostly human with scattered bits of lizard skin all across his body (and he has a tail). He is wearing a lab coat, a yellow bow tie, and purple pants. His left arm is detached from his body

The Lizard's Rank 3 outfit is mostly reptilian skin, as well as torn up clothes. His missing arm has grown back on his body.

The Lizard's Rank 5 outfit is a fully lizard-like appearance. He has green scales, a snout, and a tail. His clothes are noticeably ripped up, but he's still wearing the white lab coat.

Curt Connors was a scientist working for Oscorp. As part of the Sinister Six, he helped frame Spider-Man for crimes they were committing. He had developed a "Lizard Serum" to grow back his missing left arm, but overdosing on the serum caused him to transform into a reptilian-like monster. With help from Spider-Man, and the recently recruited Black Cat, the Academy students stopped the Lizard from helping the Sinister Six any further. After Curtis returned to his old self, he told Spider-Man that he was considering joining the Academy as a full time student. He then helped him create the Octobot Controller in order to defeat Doctor Octopus.

Doctor Octopus is a fellow member of the Sinister Six.

The Green Goblin is a fellow member of the Sinister Six. He pressured Curt into taking the rest of his Lizard Serum all at once, turning him into The Lizard.

Spider-Man shows remorse for Curt when he is transformed into The Lizard. He wants to try to cure Curt.

The Lizard is voiced by Kestin Howard and Dallas Freeman.

The Lizard arrives as a boss battle

The Lizard Ranks Ad
Add a photo to this gallery 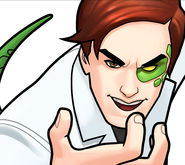 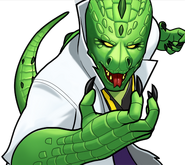 The Lizard Rank 5
Add a photo to this gallery
Retrieved from "https://avengers-academy.fandom.com/wiki/The_Lizard?oldid=58043"
Community content is available under CC-BY-SA unless otherwise noted.