The Hood, civilian name Parker Robbins, is a character you could first recruit to your academy during the Jessica Jones Special Event. His Recruitment Quest is Get The Hood! His Mission Board Quests can be found here.

Each time the Hood is upgraded, his Power Level increases.

The Hood's Rank 1 outfit is a black shirt with a silver five-pointed necklace, an unzipped hoodie with the hood up, a red vest over the hoodie, grey pants, and black shoes. His skin is pale and dark purple veins are visible on his arms and neck.

The Hood's Rank 3 outfit is a maroon hoodie with the hood up, under a tattered red coat with a high collar two silver five-pointed stars, grey pants, and black boots. His eyes glow red, and dark purple veins are visible on his arms and neck.

The Hood's Rank 5 appearance is a demon with sharp teeth, glowing red eyes, and purple-grey skin. He wears a long red coat with a flare collar and hood, grey pants, and black boots.

Once focused on becoming New York's next kingpin, the Hood joined Avengers Academy in order to stop Kilgrave. The Hood's abilities derive from Dormammu. The Hood stole Dormammu's cape of invisibility, boots that let him walk on air, and when Dormammu manifest in his living room, the Hood gained magical powers.

Dormammu manifested in the Hood's living room and gave him magical powers. He wants to take over and control the Hood, but hasn't been successful so far.

Kilgrave briefly took control of the Hood during the Jessica Jones Special Event.

The Hood is voiced by ?

The Hood Rank 5
Add a photo to this gallery 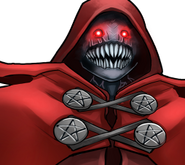 The Hood Rank 5
Add a photo to this gallery
Retrieved from "https://avengers-academy.fandom.com/wiki/The_Hood?oldid=57020"
Community content is available under CC-BY-SA unless otherwise noted.