The Arena Of War

The Arena Of War is a Building. It is available at level 18. It is an outdoor arena with space in the center for sparring. There are broken columns around the edge, two pair of arsenal weapons, and stairs that lead to an underground section. The Arena is most commonly used by two characters doing an action together in the Stage action area. This building is most closely tied with Ares. The Arena Of War takes up 5 x 5 (25) plots.

As you upgrade The Arena of War, you add to the available actions characters can do at the building.

The Arena Of War allows various interactions for many characters. 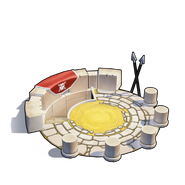 The Arena Of War Stage 1
Add a photo to this gallery
Retrieved from "https://avengers-academy.fandom.com/wiki/The_Arena_Of_War?oldid=47755"
Community content is available under CC-BY-SA unless otherwise noted.