Thanos is the primary antagonist of the Infinity War Event. Before Infinity War, he was referenced a number of times in many events, frequently appearing as a silhouette holding an Infinity Gauntlet on World News.

Thanos directed Mephisto, Hela, and Kingpin to organize a jail break from Avengers Academy. With his acolytes' help, they stole multiple artifacts and weapons from the Avengers Academy vaults, and freed Attuma, Red Skull, the Scientist Supreme, and more, from their cells.

When Thanos finally invaded Midgard, the Avengers defeated him by collaborating with Mephisto and Hela to secretly replace an Infinity Stone on his gauntlet. Iron Man forged the fake stone based off of Mephisto's Darkforce ring. While Hela distracted Thanos, Ant-Man swapped the true stone with the fake one. With the modifications, the Avengers trapped Thanos in the Darkforce Dimension.

Ant-Man helped defeat Thanos by swapping out one of the Infinity Stones in his gauntlet while Thanos was distracted.

Hank Pym has met Thanos in the past, before the Academy was built.

Thanos ordered Hela to work with the other caged villains at the Academy to orchestrate a jailbreak and steal artifacts. When he invaded Midgard, she betrayed him by creating a distraction for the Avengers.

Thanos ordered Kingpin to work with the other caged villains at the Academy to orchestrate a jailbreak and steal artifacts.

Thanos ordered Mephisto to work with the other caged villains at the Academy to orchestrate a jailbreak and steal artifacts. When Thanos invaded Midgard, Mephisto betrayed him by working with Nick Fury to trap him in the Darkforce Dimension.

Nick Fury fought Thanos in a past, alternate dimension and lost. In the Avengers Academy universe, Director Fury defeated Thanos by trapping him in the Darkforce Dimension.

Odin has met Thanos in the past, before the Academy was built.

The Outriders are genetically engineered beings that were created to aid Thanos.

Proxima Midnight is a member of Thanos' Black Order. During the Return of A-Force Special Event, he sent her to battle the Avengers and stall them for his arrival. He didn't care if she would be beaten and imprisoned.

Star-Lord was bullied by Thanos and Ronan who stuffed him in lockers when he studied in the Cosmic Conservatory.

Thane originally fought beside Thanos when he invaded Midgard during the Infinity War. When Thane failed to defeat the Avengers, Thanos threatened to kill him, and Thane switched sides to join the Avengers.

Thanos Combat Info
Add a photo to this gallery 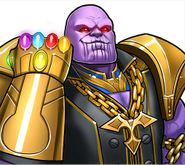 Thanos
Add a photo to this gallery
Retrieved from "https://avengers-academy.fandom.com/wiki/Thanos?oldid=59573"
Community content is available under CC-BY-SA unless otherwise noted.