"You think I'd wear a skull on my face if I was trying to make friends?"

Master combat copycat, Taskmaster, civilian name Tony Masters, was the eighth recruitable character in Avengers Academy 1.0. With the release of AVAC 2.0, he was first available to recruit during The Runaways Special Event. His Recruitment Quest is The Task At Hand. His Mission Board Quests can be found here.

Each time Taskmaster is upgraded, his Power Level increases.

Taskmaster has fair skin, his hair appears to be brown with brown eyes.

Taskmaster's Rank 1 outfit is a white hoodie under a blue jacket. He's wearing blue jeans and white sneakers. He's wearing a shield with a "T" design, a sword, and a skull bandanna covering the lower half of his face

Taskmaster's Rank 3 outfit switches the layers--the white hoodie is now on top and the blue has become a shirt on underneath that. He has laced up boots instead of sneakers and white gloves. The skull bandanna has been traded in for an actual skull mask.

Taskmaster's Rank 5 outfit is his Taskmaster outfit from the comics.

Taskmaster was originally a student from Hydra School, but he switched to Avengers Academy because he felt he wasn't challenged enough.

Taskmaster seems to be in turns impressed and antagonistic against Captain America. Despite knowing all of Steve's moves, Steve still fought him to a draw.

Taskmaster gets paired up with Enchantress a lot of the storyline quests. She thinks he's her henchman.

Loki was the reason Taskmaster was recruited to Avengers Academy.

Taskmaster teaches Wasp how to do the perfect smokey eye makeup.

Taskmaster is voiced by Adam Montoya. 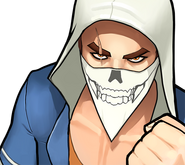 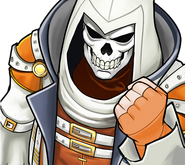 Assassin Taskmaster
Add a photo to this gallery
Retrieved from "https://avengers-academy.fandom.com/wiki/Taskmaster?oldid=58454"
Community content is available under CC-BY-SA unless otherwise noted.