The Chaste
The Hand (formerly)

Master of hand-to-hand combat and his proximity sense, Stick was first introduced as an antagonist, fighting for Madame Gao. He could later be recruited to your academy after his defeat during the Defenders Event. His Recruitment Quest was Get Stick! His Mission Board Quests can be found here.

Stick was never released for combat in Avengers Academy 2.0.

Stick's Rank 1 outfit is a green vest over a collared yellow shirt with the sleeves rolled up, grey pants, black sandals with yellow socks, a grey baseball hat, and sunglasses.

Stick's Rank 3 outfit is a short green robe over a dark yellow keikogi jacket with high-waisted gray pants and brown shoes. A yellow rope is tied around his waist like a belt, and he wears sunglasses.

Stick's Rank 5 outfit is a long, pale green robe with a yin-yang symbol on the back over a gray keikogi and hakama with a large yellow sash. He also wears brown shoes.

Stick attempted to recruit Colleen Wing to the Chaste, but she declined.

Stick was a mentor to Daredevil.

Stick was a mentor to Elektra.

Stick worked for Madame Gao when she took over Hell's Kitchen and attacked Avengers Academy. He planned on betraying her; however, she anticipated that. She wanted him to be the first person to touch an artifact in Fury's vaults so that he'd be immediately incinerated.

Nick Fury and Stick had an agreement for Stick to train prospective heroes. Stick disappeared when their agreement expired.

Stick is voiced by Jesse Adam.

Stick arrives as a boss fight

Boss Stick
Add a photo to this gallery 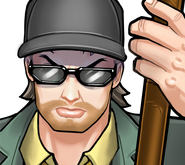 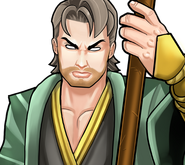 Stick Rank 5
Add a photo to this gallery
Retrieved from "https://avengers-academy.fandom.com/wiki/Stick?oldid=57946"
Community content is available under CC-BY-SA unless otherwise noted.