"I used to be a double-agent, but you can trust me. Or can you? I'm just kidding. You totally can."

A former Hydra spy, Spider-Woman, civilian name Jessica Drew, is a Premium Character you can recruit to your Academy. Her Introductory Quest is Secret Mission, Pt. 1. Her Mission Board Quests can be found here.

Each time Spider-Woman is upgraded, her Power Level increases.

Spider-Woman's Rank 1 outfit is a white long-sleeved crop top over a red tank top with a brown belt at her waist with a spider-shaped gold buckle. She wears a pair of sunglasses over her eyes with black pants and brown boots.

Spider-Woman's Rank 3 outfit is a white crop top over the same red top, with the addition of a cropped red jacket with black sleeves. Her belt is lower on her hips and entirely gold. She wears the same pants, but the boots are now black and red. She still has sunglasses.

Spider-Woman's Rank 5 outfit is a catsuit with a red torso with a gold spider emblazoned on the chest, black sleeves, and black pants. She also wears a gold belt, red boots, and red sunglasses

Spider-Woman was a Hydra agent spying on Avengers Academy, but would defect and join the Academy.

When she joined the Academy, everyone was still a little doubtful of her not being Hydra anymore, specially Director Nick Fury who kept her actions in check at all times. Wasp also didn't trust her at first after seeing her glide around the campus, but she told her she doesn't have to worry about her secrets because Hydra already knows all about their rivals so she knew everything she needed to know about the Academy students before joining already, Wasp being a gossip lover, used that opportunity to ask her all about the other students' secrets.

Through working with Wasp and Falcon, Jessica was able to prove that she had a place at Avengers Academy.

Spider-Woman helped Spider-Man when he was trying to clear his name after being incriminated by the Sinister Six.

She helped organize the alternate universe Spider-Man, and Spider-Woman that came into this universe due to Norman Osborn creating multiverse portals, and drawing them in.

When the Green Goblin was defeated, and the Oscorp building blew up, an army of imprisoned Klyntar were freed, and started bonding with human hosts, with the intent of conquering the entire planet. Spider-Woman kept organizing the Spider heroes, saving Spider-Gwen from the Klyntar, and then alongside her started looking for more heroes with Spider powers to help them defeat the Klyntar.

Since Black Widow and Jessica are fellow spies, they have an immediate camaraderie.

When Jessica first showed up at the Academy, Wasp and Falcon immediately trusted her and wanted to help her carry out her missions. Both of them were a little starstruck by the double agent. Sam has a crush on her. He repeatedly asked her out, but she declined.

Jessica and Iron Man went on a date once and seem to be on good terms. It is unclear whether they continued dating.

Initially, Nick Fury is suspicious of Spider-Woman because she used to attend Hydra school.

Spider-Woman offers to teach Spider-Girl how to pose as a Hydra Agent and infiltrate their organization.

Jessica and Spider-Ham saved Gwen from the Kylntar. They helpd each other searched some information about Symbiotes that attacked the city. Jessica also happy having another Spider-Woman in the campus.

When Jessica first showed up at the Academy, Wasp and Falcon immediately trusted her and wanted to help her carry out her missions. Both of them were a little starstruck by the double agent. Wasp told Jessica that she is what would happen if Wasp and Black Widow had a baby together.

Jessica is voiced by Kiernan Shipka.

Spider-Woman Ranks Ad
Add a photo to this gallery 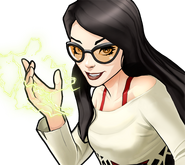 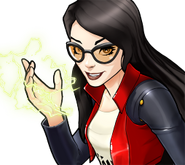 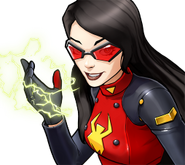 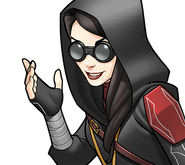 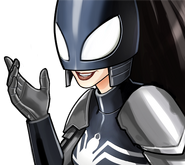 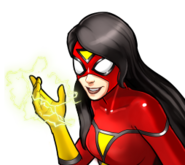 Original Spider-Woman
Add a photo to this gallery
Retrieved from "https://avengers-academy.fandom.com/wiki/Spider-Woman?oldid=58682"
Community content is available under CC-BY-SA unless otherwise noted.