"It's your friendly futuristic Spider-Man!"

Future crime-fighting spider hero Spider-Man 2099, civilian name Miguel O'Hara, is a character you could first recruit to your academy during the Spider-Man Event. His Introductory Quest was Back From the Future! His Mission Board Quests can be found here.

Each time Spider-Man 2099 is upgraded, his Power Level increases.

Miguel has tan skin, brown hair with a blue streak on the top, and brown eyes.

Spider-Man 2099's Rank 1 outfit is a blue t-shirt with a red Spider-Man 2099 logo on the left side of his chest, a blue sleeveless jacket with a red collar, blue pants with a light blue stripe down the front of his legs. His hands and wrists are wrapped with white bandages. He wears light blue boots and red glasses.

Spider-Man 2099's Rank 3 appearance is a blue and red luchador mask, a blue sleeveless jacket with a red collar, over a blue body suit. The body suit has a red Spider-Man 2099 logo on the chest and a white stripe down the front of his legs. He wears red and blue gloves, and white and blue boots.

Spider-Man 2099 knew about Roberta's Captain America alter-ego before Roberta ever found out. He told Roberta that whenever they've spoken about her identity as a Captain America before, her brain rejected it.

Loki's nickname for Spider-Man 2099 is "Spider-Man-Something-Something".

Character Upgraded! Spider-Man 2099 Rank 5
Add a photo to this gallery 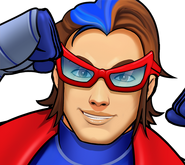 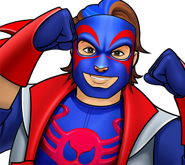 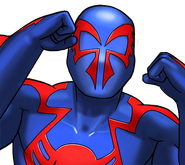 Spider-Man 2099 Rank 5
Add a photo to this gallery
Retrieved from "https://avengers-academy.fandom.com/wiki/Spider-Man_2099?oldid=58041"
Community content is available under CC-BY-SA unless otherwise noted.