Expert Inventor
Skilled Photographer
Master Banterer
He Can Do Anything a Spider Can!

"Am I supposed to say something funny or something heroic right here? I already ruined the moment, didn't I? Let's just pretend this never happened."

The friendly neighborhood wall crawler, Spider-Man, civilian name Peter Parker, is a character you could first recruit to your academy during the Civil War Event. His Recruitment Quests are Amazing Spider-Man! and Amazing Spider-Man! (Spider-Man Event). His Mission Board Quests can be found here.

Each time is upgraded, his Power Level increases.

Spider-Man's Rank 1 outfit is a red t-shirt with a web design over a long-sleeved blue shirt, jeans, red sneakers, and glasses. He also wears a gray backpack.

Spider-Man's Rank 3 outfit is jeans, red boots, a red hoodie with a black spider logo on the chest, and a half-mask with white goggles.

Spider-Man's Rank 5 outfit is his full suit and a mask.

Hydra captured Peter prior to the start of the event. Players could choose to pay shards to unlock Peter early & free him from his Hydra captors.

Iron Man's camp focused on creating an army of robots, the Iron Legion, to help protect the Academy. To improve his designs, Tony hired Peter as his assistant at Stark Industries, and Peter joined Team Iron Man. Iron Man later invited him to join the Avengers Academy.

Black Cat thinks Spider-Man is innocent and wants to help clear his name. She goes out on several dates with Peter Parker.

Black Widow asked Peter out on a date, but she revealed that it had been a cover for her to collect intel, leaving Peter somewhat heartbroken.

Iron Man invited Spider-Man to the Academy to be his assistant during the Civil War event.

J. Jonah Jameson commonly described Spider-Man as "a masked vigilante" and evil. Without his knowledge, Spider-Man worked for Jameson at the Daily Bugle as Peter Parker.

Spider-Man saved Mary Jane multiple times in the past, and he has a crush on her. She joined the Academy because she wanted to prove Spider-Man's innocence.

Spider-Girl decides to call Peter "Spider-Boy" instead of "Spider-Man", because they're about the same age.

The Gwen from this universe died, so that makes things a bit awkward between Spider-Gwen and Peter. Eventually she suggests they protect each other and then the awkwardness lessens.

Peter appears to have a crush on Wasp.

Spider-Man is voiced by Erick David.

Spider-Man trapped in his cell during the Civil War Event 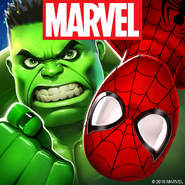 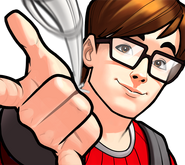 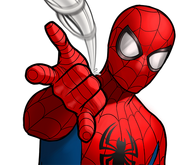 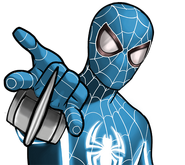 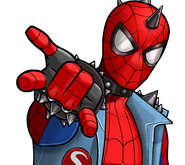 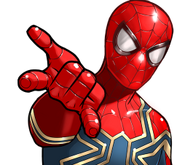 Iron Spider-Man
Add a photo to this gallery
Retrieved from "https://avengers-academy.fandom.com/wiki/Spider-Man?oldid=59823"
Community content is available under CC-BY-SA unless otherwise noted.