Expert Inventor
Skilled Photographer
Master Banterer
He Can Do Anything a
Spider AND a Pig Can!

"Is it just me, or does everyone here look really weird?"

A former spider that was bitten by a radioactive pig with super powers, Spider-Ham, civilian name Peter Porker, is a character you could first recruit to your academy during the Spider-Man Event. His Introductory Quest is Pig Out! His Mission Board Quests can be found here.

Spider-Ham was never released for combat in Avengers Academy 2.0.

Spider-Ham's Rank 1 outfit is red sneakers, jeans, and a blue long-sleeved shirt with a web-design t-shirt over it.

Spider-Ham's Rank 3 outfit is red boots, jeans, a red web-design jacket, and a half-mask with goggles.

Spider-Ham was captured in one of Oscorp's replicas of Spider-Man's web, along with Black Cat and Mary Jane. He was freed by the Academy students and helped clear Spider-Man's name.

Spider Ham is smitten with Wasp. He flirts with her and calls her the most coolest, prettiest girl at the academy. Wasp tells him she's not in to him but she doesn't want to hurt his feelings.

Spider-Ham is voiced by Christopher McCann

Spider-Ham Ad
Add a photo to this gallery 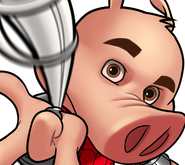 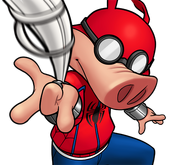 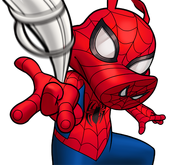 Spider-Ham Rank 5
Add a photo to this gallery
Retrieved from "https://avengers-academy.fandom.com/wiki/Spider-Ham?oldid=59806"
Community content is available under CC-BY-SA unless otherwise noted.