Spider-Gwen, civilian name Gwendolyne "Gwen" Stacy, is a character you could first recruit to your academy during the Spider-Man Event. Her Recruitment Quest is She's Back! Her Mission Board Quests can be found here.

Each time Spider-Gwen is upgraded, her Power Level increases.

Spider-Gwen's Rank 3 outfit is a white and purple sweatshirt with the hood up over a black shirt, ripped black jeans, and blue sneakers. She also wears a purple and blue choker necklace, purple headphones, and fingerless white gloves.

Spider-Gwen's Rank 5 outfit is a black bodysuit with white long sleeves and purple, web-patterned accents, a white cowl, and a white hood. The toes, heels, and soles of her boots are blue.

Spider-Gwen is from an alternate timeline, where Gwen is bitten by a radioactive spider instead of Peter Parker.

The Peter Parker from her universe turned himself into The Lizard. After a fight with Spider-Gwen he died from injuries which makes it awkward for Gwen. She overcomes the awkwardness with him after some time and they appear to be friends. Even to the point where Venom suggests to Spider-Man that she is his girlfriend.

Spider-Gwen is voiced by Heather Masters.

Gwenom Ad
Add a photo to this gallery 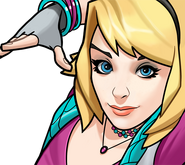 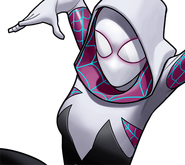 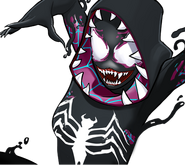 Gwenom
Add a photo to this gallery
Retrieved from "https://avengers-academy.fandom.com/wiki/Spider-Gwen?oldid=59102"
Community content is available under CC-BY-SA unless otherwise noted.