Mystically unlocking her powers, Spider-Girl, civilian name Anya Corazon, is a character you could first recruit to your academy during the Spider-Man: Homecoming Event. Her Recruitment Quest was Get Spider-Girl! Her Mission Board Quests can be found here.

Spider-Girl was never released for combat in Avengers Academy 2.0.

Anya has fair skin and red hair in a ponytail.

Spider-Girl's Rank 1 outfit is a red jacket over a white tank-top with a red spider symbol, black shorts, white knee-length socks, a red belt with pouch, and black and red sneakers with white laces. She also wears her signature yellow goggles and a black choker.

Spider-Girl's Rank 3 outfit is a sleeveless red hoodie over a black midriff tank top with a white spider symbol on the chest, black capris, white socks, black and read sneakers, black elbow length gloves, a black choker, and a red belt with pouch. She also wears her signature yellow goggles.

Spider-Girl's Rank 5 outfit is her Spider-Girl outfit from the comics. It's a black body suit with a white spider symbol on the torso, and white spider legs running down her legs and arms. She wears a black and white half mask, covering her eyes.

Spider-Girl and Silk bond over their mutual love of hockey, and occasionally practice together. Spider-Girl also helps Silk find out information about her parents' disappearance.

Spider-Girl decides to call Peter "Spider-Boy" instead of "Spider-Man", because they're about the same age.

Spider-Woman offers to teach Spider-Girl how to pose as a Hydra Agent and infiltrate their organization.

Vulture kidnapped Spider-Girl from the Midtown School for Science computer lab. Later, after she joined the Avengers Academy, she hacked into Vulture's computer and researched his background before he became a criminal.

Spider-Girl is voiced by Daisy Guevara.

World News Spider-Girl
Add a photo to this gallery 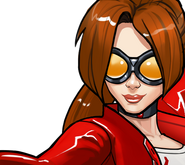 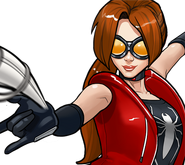 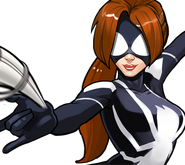 Spider-Girl Rank 5
Add a photo to this gallery
Retrieved from "https://avengers-academy.fandom.com/wiki/Spider-Girl?oldid=58029"
Community content is available under CC-BY-SA unless otherwise noted.