"The cutest sentient quantum entity ever!"

Everyone's favorite multiversal cosmic entity, Singularity, is a character you could first recruit to your Academy during the A-Force Event. Her Recruitment Quest is Get Singularity! Her Mission Board Quests can be found here.

Singularity was never released for combat in Avengers Academy 2.0.

Singularity's Rank 1 outfit is a blue sweatshirt with a picture of a galaxy on it, black tights with white stars, pink high-top sneakers, and blue necklaces. Her hair is in pig tails.

Singularity's Rank 3 outfit is a blue romper with a picture of the galaxy on it, pink sneakers, blue bracelets, and a necklace of white stars. She wears her hair down with a pink bow, and it's much longer than in Rank 1.

Singularity's Rank 5 appearance doesn't include any clothes or jewelry. Her body appears to be a blue and purple galaxy with white stars, and she wears her hair down.

Natasha asks Singularity for help in finding Thanos. When this draws Thanos' attention, Natasha promises to protect her from him. Singularity calls Natasha her "scary friend."

Singularity thinks Groot's hilarious and tries to do impersonations of him.

Loki's nickname for Singularity is "Space-Case".

Mantis and Singularity enjoy working together to help others.

Wasp and Singularity both share a very similar personality and get along really well. They immediately become friends upon meeting each other.

Singularity is voiced by Rochelle Chiang.

Singularity Rank 1
Add a photo to this gallery 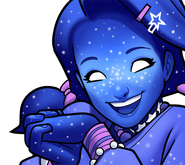 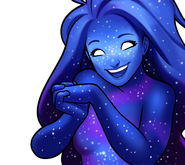 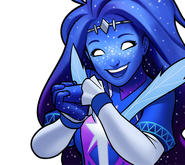 Healer Singularity
Add a photo to this gallery
Retrieved from "https://avengers-academy.fandom.com/wiki/Singularity?oldid=59440"
Community content is available under CC-BY-SA unless otherwise noted.