"Mercenary. Protector. Leader of the Pack."

The Monarch of Symkaria, Silver Sable, civilian name Silver Sablinova, is a character you could first recruit to your academy during the Spider-Man: Homecoming Event. Her Recruitment Quest was Get Silver Sable! Her Mission Board Quests can be found here.

Silver Sable was never released for combat in Avengers Academy 2.0.

Silver Sable declares she won't be Black Widow's date for the homecoming dance, claiming that she "knows" everyone wants to ask her out.

Spider-Man was rejected by Silver Sable even before he asked her to be his date for the homecoming dance. He says that he'll find a silver tuxedo if she changes her mind.

Silver Sable pretends to work for Vulture in order to infiltrate his organization and find out who he's selling technology and weapons to.

World News Silver Sable
Add a photo to this gallery 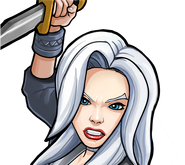 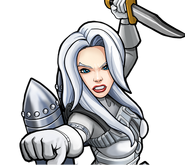 Silver Sable Rank 5
Add a photo to this gallery
Retrieved from "https://avengers-academy.fandom.com/wiki/Silver_Sable?oldid=58138"
Community content is available under CC-BY-SA unless otherwise noted.