Bit by the same spider as Spider-Man, Silk, civilian name Cindy Moon, is a character you could first recruit to your academy during the Spider-Man: Homecoming Event. Her Introductory Quest was Silky, pt. 1. Her Mission Board Quests can be found here.

Each time Silk is upgraded, her Power Level increases.

Silk's Rank 1 outfit is black and white striped sweater, a red belt, black shorts over black leggings, and black flats. She also has a red scarf tied around her neck.

Silk's Rank 3 outfit is a bodysuit with a black torso, white spider web design across the chest, with a red 'S' symbol at the center, over a red turtleneck. She wears high-waisted black shorts over grey leggings with black shoes. She also wears red finger gloves.

Silk's Rank 5 outfit is her full "Silk" suit from the comics. It's a black bodysuit with a white torso, a red spider web design across the chest, with a red 'S' symbol at the center, a red turtleneck and half mask covering her mouth, red gloves, and black and white shoes.

J. Jonah Jameson hired Silk as a reporter at the Daily Bugle. He told her she had a better chance of getting published if her article blamed Spider-Man.

Spider-Girl and Silk bond over their mutual love of hockey, and occasionally practice together. Spider-Girl also helps Silk find out information about her parents' disappearance.

Silk is voiced by Victoria Wong.

Silk Rank 5
Add a photo to this gallery 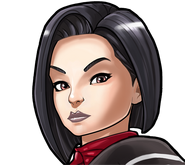 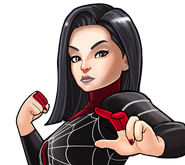 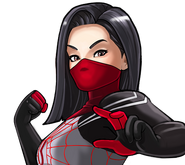 Silk Rank 5
Add a photo to this gallery
Retrieved from "https://avengers-academy.fandom.com/wiki/Silk?oldid=58028"
Community content is available under CC-BY-SA unless otherwise noted.