"Midgard is wonderful, but I do miss stabbing dragons..."

The mighty Asgardian warrior, Lady Sif is a character you could first recruit to your academy during the Civil War Event. Her Recruitment Quest is Charge Into Battle! Her Mission Board Quests can be found here.

Sif was never released for combat in Avengers Academy 2.0.

Sif's Rank 1 outfit is a red track jacket over a black sports bra, black leggings, and black tennis shoes. Her hair is in a ponytail, with a black visor. Her sword is slung over her back.

Sif's Rank 3 outfit is a cropped red leather jacket over a silver top, brown gauntlets, black trousers with silver knee guards, black boots, and a red sash belt. Her hair is in a ponytail, with a silver tiara.

Elsa asked Sif to be her backup, just in case things went south when she approached the Legion of Monsters while looking for her brother.

One of Sif's actions, "Punk the Trickster", involves Loki attempting to steal her sword, and her catching him, tossing him into the air, and letting him crash on the table.

Valkyrie recruits Sif to her new side team of Valkyries to defeat Hela.

Sif is voiced by Nika Futterman.

Returning Hero Sif
Add a photo to this gallery 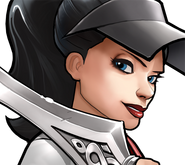 Sif Rank 5
Add a photo to this gallery
Retrieved from "https://avengers-academy.fandom.com/wiki/Sif?oldid=58292"
Community content is available under CC-BY-SA unless otherwise noted.