Princess of Wakanda, Shuri is a character you could first recruit to your academy during the Black Panther Event. Her Recruitment Quest is Get Shuri! Her Mission Board Quests can be found here.

Each time Shuri is upgraded, her Power Level increases.

Shuri's Rank 5 outfit is a purple, gold, and black masked panther suit with a large pink and purple collar. She wears gold and black boots, a gold belt with a silver panther buckle, and a purple cape lined with fur.

After Shuri joined Avengers Academy, she upgraded Director Fury's computer systems. She questioned his priorities for the Academy, and he agreed he'd neglected some things due to being busy saving the world. Shuri declared she'd share Wakanda's secrets with him to strengthen the Academy.

Shuri built Hawkeye's Ronin outfit using the same technology as used in the Black Panther suit, but made some adjustments to take Hawkeye's human physiology into account.

Shuri asked Klaw to call off his war, promising to build him a new Sonic Converter arm in exchange. Klaw refused.

Shuri and Ironheart quickly bonded over their enthusiasm for inventing high-tech weaponry and became friends.

Shuri Rank 5
Add a photo to this gallery 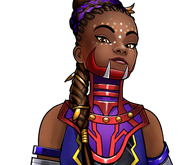 Shuri Rank 5
Add a photo to this gallery
Retrieved from "https://avengers-academy.fandom.com/wiki/Shuri?oldid=58481"
Community content is available under CC-BY-SA unless otherwise noted.