"I don't have anger issues, but I have issues with people who make me angry."

She-Hulk, civilian name Jennifer "Jen" Walters, is a Premium Character you could first recruit to your academy during the A-Force Event. Her Recruitment Quest is Get She-Hulk! Her Mission Board Quests can be found here

Each time She-Hulk is upgraded, her Power Level increases.

She-Hulk's Rank 3 outfit consists of black and purple mid-calf leggings with a purple and white short-sleeved top with a zipper. She wears a black belt with a silver buckle, purple wristbands, and black high-top sneakers with white socks.

She-Hulk's Rank 5 outfit is a pink sleeveless bodysuit with a zipper with a white torso, black panels on her sides, a black band around her thighs and collar. Her belt gains a pouch, and she wears black fingerless driving gloves, and low black boots.

Ares thinks She-Hulk is too nice because she brings donuts to everyone.

Daredevil flirted with her, but she turned him down gently.

Hercules and She-Hulk once went on a dinner date. She suggest they go on a second date sometime.

She-Hulk and and Red She-Hulk don't always get along very well.

Back at the Cosmic Conservatory, She-Hulk once talked Thanos out of bashing in Rocket Raccoon's head.

Wasp has a bit of a crush on She-Hulk.

She-Hulk Ad
Add a photo to this gallery 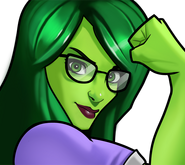 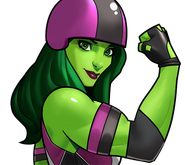 Roller Derby She-Hulk
Add a photo to this gallery
Retrieved from "https://avengers-academy.fandom.com/wiki/She-Hulk?oldid=58478"
Community content is available under CC-BY-SA unless otherwise noted.