Scientist Supreme is the leader of the criminal organization known as A.I.M. (Advanced Idea Mechanics) and the headmaster of the A.I.M. Institute of Super-Technology. They're one of the primary antagonists in the Legends Assemble Event. During the event, they sent Leader to battle the students.

Scientist Supreme is wearing a bright yellow and black hazmat suit tricked out to look like armor. They have a black cape with glowing tubes on the back.

Scientist Supreme was seeking to recruit Ms. Marvel to the A.I.M. Institute (because she was the only one who could stop A.I.M.'s plans of world domination) and was very angry when she decided to go to Avengers Academy instead. 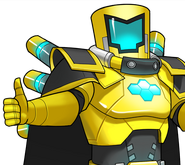 Scientist Supreme Icon
Add a photo to this gallery
Retrieved from "https://avengers-academy.fandom.com/wiki/Scientist_Supreme?oldid=51495"
Community content is available under CC-BY-SA unless otherwise noted.