"There's a special place in Hell for me. The throne."

The Devil's daughter, Satana Hellstrom, was first introduced as an antagonist, fighting for Mephisto. She could later be recruited to your academy after her defeat during the Avengers Halloween Event. Her Recruitment Quest is Get Satana! Her Mission Board Quests can be found here.

Satana was never released for combat in Avengers Academy 2.0.

Satana's Rank 1 outfit is a black miniskirt, black midriff top with fishnet mesh, a black leather jacket with the sleeves pushed up to her elbows, fingerless black gloves, knee-high black boots, and fishnet leggings. She has flame and pentagram tattoos on her forearms.

Satana's Rank 5 outfit is a black bodysuit with the midriff and hips cut out, a black cape with red inner lining, a black choker with gold demon head jewelry, and black high heels.

As a little girl, Satana grew up in Greentown, Massachussets. Her father practiced dark magic in the basement of their home. After she developed demonic powers her father gave her to Mephisto. Mephisto trapped her in Hell against her will.

After the Avengers defeated Satana and she joined the Academy, she used J.A.R.V.I.S. to come up with a strategy to defeat Mephisto. She traveled back to her abandoned childhood home and found a Basilisk that her father trapped there. The Basilisk, a very powerful demon that hates Mephisto, and Satana decided to bond. Satana knew she may not be able to control the Basilisk, but she also knew Mephisto wouldn't be able to control it either.

After bonding with the Basilisk, she enlisted Falcon's help, using his Penguin outfit, in bringing more demons over to her side in order to overthrow Mephisto. She arranged a meeting with the Hell-Lords to convince them, where she proved her strength through combat, and Falcon charmed everyone with penguin stories. Ultimately, she convinced the Hell-Lords to help.

Satana asked for Falcon's help in persuading more demons to join her side in overthrowing Mephisto. She asked him to use his Penguin outfit, because penguins are beloved in Hell.

Satana got Robbie hooked on s'mores.

When Satana joined the Academy, Loki mistakenly thought she was the famous guitarist Santana.

Satana's father brought her to Mephisto to be trained in the use of her demonic powers. When she tried to leave, he refused, trapping her in Hell.

Satana is voiced by Tessanie Rizvi

Satana arrives as a Boss Fight

Satana Rank 5
Add a photo to this gallery 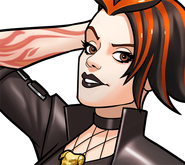 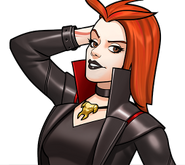 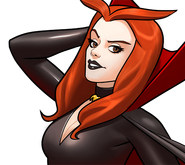 Satana Rank 5
Add a photo to this gallery
Retrieved from "https://avengers-academy.fandom.com/wiki/Satana?oldid=59402"
Community content is available under CC-BY-SA unless otherwise noted.