Seismic-powered Inhuman and S.H.I.E.L.D. agent, Quake, civilian name Daisy Johnson, is a Premium Character you could first recruit to your academy when she was released during March 2016. Her Introductory Quest is Shake Things Up!, pt. 1. Her Mission Board Quests can be found here.

Each time Quake is upgraded, her Power Level increases.

Quake's Rank 3 outfit is a white body suit with a black utility belt and black boots. Her gauntlets extend up to her elbows.

Quake's Rank 5 outfit is a gray body suit with white trim and a black utility belt. Her gauntlets extend all the way up her arms, and she wears calf-length black boots and kneepads.

Black Widow volunteers to help her find out the truth about her father.

Iron Man reinforced her dorm so that it'd be safe for her to live at Avengers Academy.

Karnak taught Quake some meditation techniques to improve her control over her powers.

Maria Hill recommends that she talk to Fury about her father.

Quake Rank Ad
Add a photo to this gallery 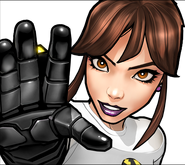 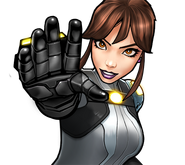 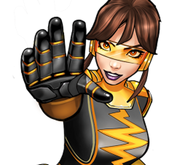 Secret War Quake
Add a photo to this gallery
Retrieved from "https://avengers-academy.fandom.com/wiki/Quake?oldid=58710"
Community content is available under CC-BY-SA unless otherwise noted.