"My plan is to pretend like I'm not awestruck by everyone here. Unless I start giggling uncontrollably..."

The ultimate superhero fanboy and S.H.I.E.L.D. agent, Philip J. "Phil" Coulson, is a Premium Character you could first recruit to your academy when he was released during August 2016. His Introductory Quest was Agent of Avengers Academy. His Mission Board Quests can be found here.

Each time Phil Coulson is upgraded, his Power Level increases.

Phil Coulson's Rank 1 outfit is a black jacket over a white shirt with a blue tie. He wears jeans, red sneakers, and a Captain America messenger bag.

Phil Coulson's Rank 3 outfit is a black suit jacket over a collared white shirt with a blue tie, black pants, and black shoes. His tie has an Avengers logo near the bottom. He has a S.H.I.E.L.D. identification card clipped to his breast pocket, and he wears black sunglasses.

Phil Coulson's Rank 5 outfit is a bulletproof vest with the Avengers logo on it, over a white collared shirt. He wears jeans with a black utility belt, a holster on his left thigh, kneepads, and black boots. He also wears black sunglasses and a watch.

Coulson's first words to Steve were "I love you". He then went on to explain that he loves everything Captain America stands for, that Steve was one of his dad's heroes, and that Steve was his reason for getting into the super hero business.

Coulson is a big fan of Patsy and her comics. He even "saved" Patsy from the media.

Phil Coulson Ad
Add a photo to this gallery 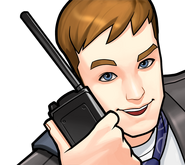 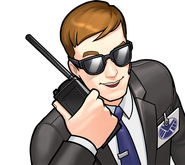 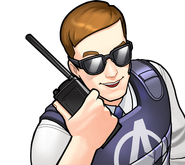 T.A.H.I.T.I. Coulson
Add a photo to this gallery
Retrieved from "https://avengers-academy.fandom.com/wiki/Phil_Coulson?oldid=58973"
Community content is available under CC-BY-SA unless otherwise noted.