The administrator of the academy and Tony's lovable assistant, Rescue, civilian name Virginia "Pepper" Potts, is a character you could first recruit to your academy during the Women Of Power Event. Her Recruitment Quests are To The Rescue! (Limited Time!) or Get Pepper Potts! Her Mission Board Quests can be found here.

Pepper Potts was never released for combat in Avengers Academy 2.0.

Pepper Potts' Rank 1 outfit is a white blouse over a red shirt, black skirt, red tights, on red armored gauntlet and boots, and a gold bracelet.

Pepper Potts' Rank 3 outfit is a white long sleeved shirt, black pants, pieces of her Rescue armor coming together, strapped to her body in various places, and red armored boots.

When Nick Fury established Avengers Academy, he hired Pepper Potts to be the administrator of the academy. Pepper is most involved overseeing the current students and recruitment of other young heroes, either chosen by her or suggested by students.

Black Widow wants to train Pepper Potts to be a super hero.

The Chitauri Soldier asked Pepper Potts out on a date, but she turned him down.

Upon first meeting, Pepper and Matt flirted with each other. Later, she was upset after she found out he purposely withheld knowledge from her that Bullseye wanted to kill her.

Pepper Potts found and recruited Falcon to the Avengers Academy.

Pepper and Danny go to the same yoga class.

Iron Man constantly annoys Pepper. However, he also built her a personalized super suit, so perhaps it evens out. Tony proposed that Pepper lead Stark Industries, however she's not sure if that's what she wants to do with her life. Iron Man and Pepper are dating.

Pepper Potts admires the Dora Milaje's focus and discipline so much she asked Okoye if she could join. Okoye refused her.

Wasp wants to train Pepper Potts to be a superhero.

Pepper Potts is voiced by ???.

Pepper Potts on TV with Tony and Janet 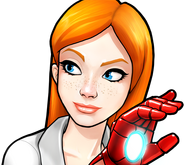 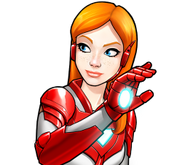 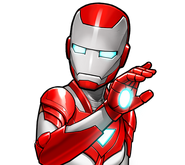 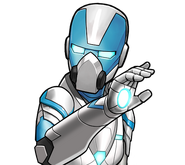 Destroyer Pepper Potts
Add a photo to this gallery
Retrieved from "https://avengers-academy.fandom.com/wiki/Pepper_Potts?oldid=59460"
Community content is available under CC-BY-SA unless otherwise noted.