"The Spirit of Lady Liberty is found in her people."

World War II secret agent, Agent Carter, civilian name Margaret "Peggy" Carter, is a Premium Character you could first recruit to your academy when she was released during September 2016. Her Recruitment Quest is Agent Carter! Her Mission Board Quests can be found here.

Each time Peggy Carter is upgraded, her Power Level increases.

Peggy Carter's Rank 1 outfit is a blue blouse with a white collar and small buttons tucked under a white knee-length skirt with blue trim, with red heels and a red bow-tie hair clip.

Peggy Carter's Rank 3 outfit is a blue buttoned blazer with a matching knee-length skirt, with a white shirt's collar visible over the blazer's, paired with red heels and a red hat.

Peggy Carter's Rank 5 outfit is a belted blue trench coat with SSR pins on the lapels, with a white turtleneck underneath. She has red pants that are tucked into red high-heeled boots. She wears black gloves and a red cartwheel hat.

While attempting to bring Howard Stark to the future, Tony accidentally brought Peggy through a time portal instead. Stuck in the present, she joined Avengers Academy.

Black Widow was the the first person to greet Peggy, and she was uncharacteristically nervous. She admitted that Agent Carter was one of her heroes growing up. Natasha even told Wasp that Peggy is better than she ever imagined she would be.

After the initial surprise of reuniting with each other, Steve and Peggy seemed to pick up their relationship right where it left off, with a dance of course. They appear to have the same feelings for each other as in the films.

Peggy is like an aunt to Tony, and he calls her Aunt Peggy. Tony accidentally brought Peggy through a time portal and into the present time.

Agent Carter is one of Jemma Simmons' heroes and she's thrilled to meet her in person. When they met, Peggy admired Jemma's experiments on enhanced physical strength, and her work ethic. 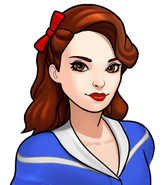 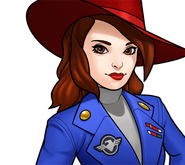 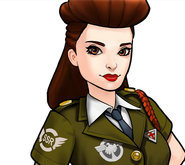 Agent Peggy Carter
Add a photo to this gallery
Retrieved from "https://avengers-academy.fandom.com/wiki/Peggy_Carter?oldid=58705"
Community content is available under CC-BY-SA unless otherwise noted.