General
Leader of the Dora Milaje

General of the Dora Milaje, Okoye is a character you could first recruit to your academy during the Black Panther Event. Her Recruitment Quest is Get Okoye! Her Mission Board Quests can be found here.

Each time Okoye is upgraded, her Power Level increases.

Okoye's Rank 1 outfit is a cropped red jacket over an orange midriff shirt with a long red and yellow skirt. She also wears a gold neck ring.

Okoye's Rank 5 outfit is her full red and orange Dora Milaje uniform with gold armor. She wears knee-length blue boots and Kimoyo beads on each wrist.

Okoye is a general and the leader of the Dora Milaje, the bodyguards for the Wakandan royal family and defender of the people of Wakanda. She left Wakanda and joined Avengers Academy in order to protect Black Panther.

Determined to protect Wakanda, Okoye petitioned Black Panther to expand the Dora Milaje. With his endorsement, she began searching the United States for women with Wakandan heritage. Okoye's search led her to a woman in Chicago that's unaware of her heritage. She told the woman about her heritage, that her grandmother was part of the Dora Milaje, and that her true name is Ce'Athauna.

While in Chicago, Okoye found a man fighting crime and using the 'Black Panther' moniker. Okoye and Valkyrie went back to Chicago to determine the man's intentions, and while questioning him, he mentioned Wakanda's secret Heart-Shaped Herb. Concerned the herb was smuggled out of Wakanda and being cultivated by an unknown source, Okoye asked Director Fury to share his intelligence on plant smuggling. With his intel, Okoye identified a Wakandan botanist operating in Chicago and creating a synthetic version of the Heart-Shaped Herb. She then teamed up with Valkyrie and Falcon to confront the botanist and extradite them back to Wakanda.

Okoye is very loyal to Black Panther and the leader of his bodyguards, the Dora Milaje. She joined the Avengers Academy to protect him.

Falcon gave Okoye permission to train his penguins as bodyguards. Falcon questioned why Okoye told him about one of Wakanda's most precious secrets, the Heart-Shaped Herb, and Okoye said the Avengers had proven themselves trustworthy.

Convinced that Wakanda's national security helped stabilize the rest of the world's security, Director Fury shared his intelligence on plant smuggling with Okoye to investigate the culprit responsible for smuggling the Heart-Shaped Herb outside of Wakanda.

Pepper Potts admires the Dora Milaje's focus and discipline so much she asked Okoye if she could join. Okoye refused her.

Okoye is voiced by Bindy Coda.

Okoye Rank 5
Add a photo to this gallery 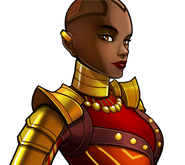 Okoye Rank 5
Add a photo to this gallery
Retrieved from "https://avengers-academy.fandom.com/wiki/Okoye?oldid=58486"
Community content is available under CC-BY-SA unless otherwise noted.