"Director of S.H.I.E.L.D. Leader of Avengers. Loser of Patience."

The headmaster of Avengers Academy and Director of S.H.I.E.L.D., Nicholas "Nick" Joseph Fury debuted as an NPC that only appeared in chat cutscenes. He could later be recruited to Avengers Academy during the Legends Assemble Event. His recruitment quest is Get Nick Fury! His mission board quests can be found here.

Each time Nick Fury is upgraded, he gives +10% on Mission Board Quests.

Nick Fury's Rank 1 appearance is a black trench coat with the S.H.I.E.L.D. logo on the sleeves over a white dress shirt and black tie.

Nick Fury's Rank 3 appearance is a black trench coat with the S.H.I.E.L.D. logo on the arms, with silver gauntlets and fingerless black gloves. Under the coat he's wearing a blue turtleneck with a black tactical vest over top, black padded trousers, and black combat boots.

Nick Fury's Rank 5 appearance is a black trench coat with the S.H.I.E.L.D. logo on the arms, with a silver gauntlet one on arm and the gold, bejeweled Infinity Gauntlet on the other, and fingerless black gloves. Under the coat he's wearing a blue turtleneck with black tactical vest over top, black padded trousers with silver knee pads, a utility belt, and black combat boots.

Fate of the Prime Universe Edit

Black Widow confronted Nick Fury yet again about the secrets he's hiding, and he finally confessed that he's from an alternate universe. Hank Pym named the first universe the Prime Universe. Director Fury said it has a code number, but the number isn't revealed. In the Prime Universe, Thanos was bigger and deadlier and killed the Avengers. He acquired two Infinity Gauntlets, went to Earth and started killing all the superhumans. He defeated S.H.I.E.L.D., the Avengers, Guardians of the Galaxy, Asgardians, and the galaxy's mightiest heroes and most powerful villains. However, Fury had a Reality Gem from another universe. He came across it during one of his first missions as Director of S.H.I.E.L.D. With everyone died, Fury didn't know what else to do, so he used the Reality Gem. It started cycling through different universes. He didn't know if he was traveling through them, or subconsciously creating them. When he let go, he ended up in the Avengers Academy universe.

Fury and Hank believe the Prime Universe still exists, but they haven't been able to find their way back.

When Fury arrived in the Avengers Academy universe, Odin found him. Some of the gods and immortals still remember the Prime Universe. They started looking around for everyone that remembered, and found the timefog. They found Hank Pym, but Fury knew he'd seen the Prime Universe Hank die. This Hank confessed he wasn't the same person, but that he'd spoken to the Prime Universe Pym.

After a while, the rest of the heroes and villains started show up again, but younger. The same, but different. So Fury vowed to do whatever he could to make sure the tragedy of the Prime Universe never happened again. He and Odin rebuilt S.H.I.E.L.D., traveled the galaxy gathering every weapon and object of power they could, and hid them in S.H.I.E.L.D.'s vaults. Fury began training heroes and villains alike, knowing that when Thanos arrived in this world, they'd need all the help they could get. The only villains he refused to let join were the ones that betrayed him or refused to fight in the Prime Universe. He chose to lock the up, rather than taking the chance of it happening again.

Fury refused to tell the Academy students the full story at the beginning because he wanted them solely focused on preparing for Thanos' arrival.

When Thanos invaded Midgard, Nick Fury led the Avengers in defeating him by collaborating with Mephisto and Hela to secretly replace an Infinity Stone on Thanos' gauntlet. Iron Man forged the fake stone based off of Mephisto's Darkforce ring. While Hela distracted Thanos, Ant-Man swapped the true stone with the fake one. With the modifications, the Avengers trapped Thanos in the Darkforce Dimension.

After being warned by Hank Pym of the imminent destruction of the universe, Fury told Pepper and the Academy students that he was shutting down Avengers Academy.

Black Widow doesn't trust Fury and believes he's hiding something from them. He finally told her his secrets during the Infinity War Event.

Captain Marvel works with J. Jonah Jameson to uncover the fact that Fury imprisoned students in the Cosmic Conservatory. He tells her that he did it to protect everyone.

Director Fury gave the Collector permission to acquire new specimens for his museum while on Earth, as long as he doesn't harm any of the Avengers Academy students.

When Nick Fury established Avengers Academy, he hired Hank Pym to be the chemistry teacher.

Iron Man is the first student Nick Fury recruited to Avengers Academy. Fury is often hard on Tony because he wants Tony to be the best he can be.

Nick Fury tried and failed to convince Killmonger not to attack Thanos on his own, because he thought it was a suicide mission.

Convinced that Wakanda's national security helped stabilize the rest of the world's security, Director Fury shared his intelligence on plant smuggling with Okoye to investigate the culprit responsible for smuggling the Heart-Shaped Herb outside of Wakanda.

Nick Fury attended one of Orrgo's family reunions on Mentelleronite.

Nick Fury and Stick had an agreement for Stick to train prospective heroes. Stick disappeared when their agreement expired.

Nick Fury fought Thanos in a past, alternate dimension and lost. In the Avengers Academy universe, Director Fury defeated Thanos by trapping him in the Darkforce Dimension. 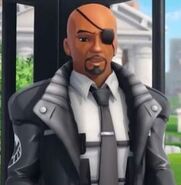 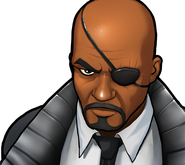 Undercover Nick Flurry
Add a photo to this gallery
Retrieved from "https://avengers-academy.fandom.com/wiki/Nick_Fury?oldid=59047"
Community content is available under CC-BY-SA unless otherwise noted.