Cybernetic assassin Nebula is a Premium Character you could first recruit to your academy during the Guardians of the Galaxy Event. Her Introductory Quest is Her World. Her Mission Board Quests can be found here.

Each time Nebula is upgraded, her Power Level increases.

Nebula's Rank 5 outfit is a purple and black top with only one long sleeve, ripped blue jeans, a purple belt with ruffles, dark purple boots, and a spiked black choker necklace. She also wears a black elbow pad and a fingerless black glove on her cybernetic arm. She carries twin staves sheathed on her back.

Nebula is told to spy on Loki by Ronan, but instead befriends him and ends up joining Avengers Academy.

Nebula relates to Keeper Murdock because they both come from a place of pain and were manipulated by a tyrant.

Nebula and Gamora were raised together by Thanos.

Nebula is voiced by Linnea Sage.

Nebula asleep in her escape pod

Nebula Ad
Add a photo to this gallery 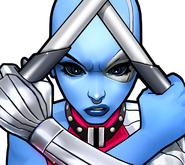 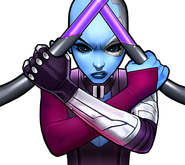 Nebula Rank 5
Add a photo to this gallery
Retrieved from "https://avengers-academy.fandom.com/wiki/Nebula?oldid=59276"
Community content is available under CC-BY-SA unless otherwise noted.