"This will be my most magical performance yet..."

Master of illusion and perfectionist of the slight of hand, Mysterio, civilian name Quentin Beck, was first introduced as an antagonist, fighting with the Symbiotes. He could later be recruited to your academy after his defeat during the Spider-Man Event. His Recruitment Quest is Let's Make Some Magic! His Mission Board Quests can be found here.

Each time Mysterio is upgraded, his Power Level increases.

Mysterio's Rank 3 outfit is a smoke glass headgear and green lines shirt with green jacket and purple neck-wear with Mysterio medallion in it. He also has a yellow gloves with wrist-gear, green pants with yellow belt, and a yellow boots.

Electro and Mysterio were both apart of the Sinister Six. Mysterio busted Electro out of jail to recruit him to work alongside the symbiotes.

Mysterio is voiced by Matthew Posner.

Mysterio arrives as a Boss Fight

Mysterio Spider-Man Homecoming Ad
Add a photo to this gallery 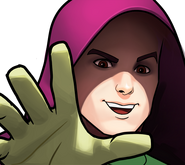 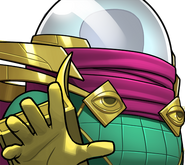 Mysterio Rank 5
Add a photo to this gallery
Retrieved from "https://avengers-academy.fandom.com/wiki/Mysterio?oldid=58038"
Community content is available under CC-BY-SA unless otherwise noted.