"I finally get to help my heroes crush the forces of evil! Please don't tell my parents..."

Fangirl, shape-shifter, and teenage superhero Ms. Marvel, civilian name Kamala Khan, is the sixth recruitable character in Avengers Academy. Her Recruitment Quest is Freak Out. Her Mission Board Quests can be found here.

Each time Ms. Marvel is upgraded, her Power Level increases.

Kamala's Rank 1 outfit is blue tennis shoes, red track pants, a light blue shirt with the yellow lightning bolt on it, a darker blue jacket, and a red scarf around her neck. She also has a gold bracer on her left arm.

Kamala's Rank 3 outfit is a dark blue jacket with a gold lightning bolt on the chest, red scarf, red pants, black gloves, a gold bracer on one arm, and blue shoes.

Captain America was training Kamala for combat, but when the first battle with A.I.M. came he wanted to leave her at home because he didn't think she was ready. However, it turned out that A.I.M.'s invincible robot had only one weakness—geeky trivia. Since Kamala was uniquely qualified to handle such an enemy, she joined the team on their next fight against A.I.M.

Falcon and Kamala teamed up to defeat A.I.M along with Wasp, as the All-New Avengers, with Kamala leading the team. Later, Kamala and Sam went on a date, with Odin as a chaperone.

Loki is exactly the sort of boy Kamala's parents don't want her near.

Miles and Kamala are friends. They stole a Quinjet to hunt down Symbiotes together, and discovered they made a great team.

Nick Fury thinks Kamala is one of the most promising heroes he has ever encountered.

Wasp collected autographs from all of the super heroes at the Academy to help convince Ms. Marvel to join.

Janet joined the team led by Kamala to defeat A.I.M.

Kamala is voiced by Priyanka Chopra. 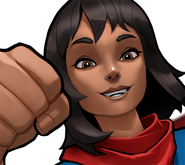 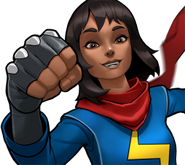 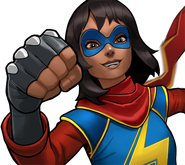 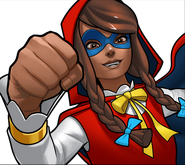 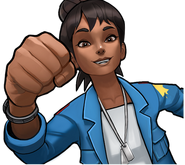 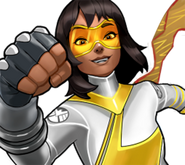 Secret War Ms. Marvel
Add a photo to this gallery
Retrieved from "https://avengers-academy.fandom.com/wiki/Ms._Marvel?oldid=58689"
Community content is available under CC-BY-SA unless otherwise noted.