The most intelligent person in the world, Moon Girl, civilian name Lunella Louise Lafayette, is a character you could first recruit to your academy during the Monsters Unleashed Event. Her Recruitment Quest is Get Moon Girl! Her Mission Board Quests can be found here.

Moon Girl was never released for combat in Avengers Academy 2.0.

Moon Girl's Rank 1 outfit is a black t-shirt with a logo of a red dinosaur head on a white circular background. Her skirt is tucked into knee-length brown shorts, with a black belt. She has a blue backpack with red trim and wears large purple glasses. She wears red sneakers with blue laces, paired with yellow and black argyle socks.

Moon Girl's Rank 3 outfit is a white t-shirt with a moon and dinosaur design over a long-sleeved blue shirt with a red bow tie. She wears yellow shorts, a black utility belt, black and yellow argyle socks, and red and blue sneakers. She also wears large purple glasses, red gloves, and a blue backpack with red trim.

Moon Girl's Rank 5 outfit is a white moon t-shirt over a long-sleeved blue shirt, blue and yellow pants, and tan knee-high boots. She wears a yellow helmet with large yellow glasses, a yellow backpack, and a black utility belt with several radios attached. She also wears a red boxing glove on her right hand and a regular red glove on her left.

When the Collector tries to acquire Devil Dinosaur for his museum, Moon Girl stops him. Based off her research of his home planet, Cygnus X-1, he's not truly immortal.

Moon Girl swaps consciousness with Devil Dinosaur in order to make sure no one can ever take control of his mind again.

Iron Man is intimidated by Moon Girl because she's smarter than him, but she reminds him of himself.

Karnak offered to teach Moon Girl how to control swapping bodies with Devil Dinosaur, so she doesn't do it by accident.

Moon Girl is fascinated by Zabu, and wants to learn how it's possible for a smilodon to still be alive.

Moon Girl and Devil Dinosaur
Add a photo to this gallery 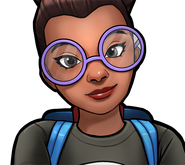 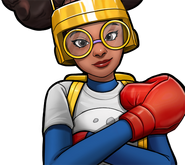 Moon Girl Rank 5
Add a photo to this gallery
Retrieved from "https://avengers-academy.fandom.com/wiki/Moon_Girl?oldid=59197"
Community content is available under CC-BY-SA unless otherwise noted.