The youngest of the Runaways, Princess Powerful, civilian name Molly Hayes, is a character you could first recruit to your academy during the The Runaways Special Event. Her Recruitment Quest is Get Molly Hayes! Her Mission Board Quests can be found here.

Each time Molly Hayes is upgraded, her Power Level increases.

Molly Hayes has 10% bonus evasion and her attacks are all armor penetrating.

Molly Hayes's Rank 5 outfit is a zipped up pink jacket with white stripes, white stars on the center, white pom-poms on the elbows, a pink tail attached to it, and a hood shaped like a cat. She also wears knee-high red converse sneakers and a grey and turquoise backpack shaped like a rabbit. Her eyes glow pink, and she has band-aids on one knee

Like the rest of the Runaways, Molly Hayes was stunned to discover her parents were evil people that sacrificed victims to an ancient deity for power in return. To escape their parents, the teenagers ran away from home. Eventually, after her parents were killed, Molly ended up living with her grandmother.

Molly was attending high school in California when Hydra agents raided her school and tried to kidnap her. After evading them, her grandmother took her to New York to visit Avengers Academy. She got a permission slip so she can attend Avengers Academy.

Nico Minoru helped Molly settle in at the Academy, and the young girl made friends with Amadeus Cho and joined Tigra's cheerleader squad. While Amadeus helped Molly learn the range of her super strength powers, Molly still doesn't fully understand the source of her powers.

Amadeus Cho helped Molly discover the range of her powers by methodically testing and analyzing her strength.

Molly Hayes is voiced by ??? 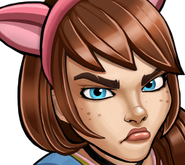 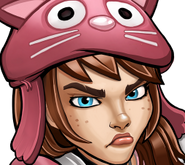 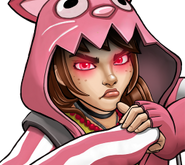