"With great power comes great responsibility. What would Peter Parker do?"

Inspired by Peter Parker's legacy the Ultimate Spider-Man, civilian name Miles Morales, is a Premium Character you could first recruit to your academy during the Spider-Man Event. His Introductory Quest was The Ultimate Hero! His Mission Board Quests can be found here.

Each time Miles Morales is upgraded, his Power Level increases.

Miles Morales' Rank 1 outfit is a black and red hoodie with a spider web design, gray jeans, and red shoes.

Miles Morales' Rank 3 outfit is a black, grey, and red sweater with the Ultimate Spider-Man symbol and gray jeans. He wears red shoes, red gloves, and a black and red mask over his eyes.

Miles and Kamala are friends. They stole a Quinjet to hunt down Symbiotes together, and discovered they made a great team.

Miles looks up to Peter because in Miles' universe Peter Parker is deceased. 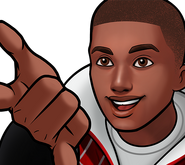 Miles Morales Rank 3
Add a photo to this gallery
Retrieved from "https://avengers-academy.fandom.com/wiki/Miles_Morales?oldid=59825"
Community content is available under CC-BY-SA unless otherwise noted.