The Lord of Hell, Mephisto, is the primary antagonist in the Avengers Halloween Event. During the event, he sent Demons to roam the campus and battle the students.

He also appeared as an antagonist in the Avengers Under Siege Event.

Mephisto's seen to be the "leader" of the celled villains, due to the fact that he set a plan in motion under Thanos' order. He's been seen talking about how they need "Just one more pretty face." before said plan can come to fruition. (The Destroyer Armor does not count. As said by the lord of hell himself, "That thing barely has a face.")

When Thanos invaded Midgard, Nick Fury led the Avengers to defeat him by collaborating with Mephisto and Hela to secretly replace an Infinity Stone on Thanos' gauntlet and trap him in the Darkforce Dimension. Iron Man forged the fake stone based off of Mephisto's Darkforce ring.

Mephisto revealed Daredevil's true identity to Kingpin. Mephisto saw another timeline where Kingpin broke Daredevil, and Daredevil became a ruthless leader of the Hand. The devil was curious what would happen in this timeline, so he gave the info to Kingpin.

Mephisto has pink skin, wild red hair, and red eyes. He wears a red robe with a cloak, and two gold chain necklaces.

Mephisto offered to help Abomination escape if he agreed to work for Thanos.

Mephisto agreed to give Baron von Strucker instructions for operating the Satan Claw, the location for Area 13, the Nexus of All Realities, and the zombie dimension.

Mephisto persuaded Baron Zemo to free him and other villains from their cells during the Avengers Under Siege Event, promising him that he'd work for him. He lied.

Mephisto attempted to butter up Frigga by telling her she's a better Guardian of Hel than Hela is. Then he tried to convince her to free him from his cell so he could assist in future battles. Frigga called him out on his true intentions, that he just wanted eat Asgardian souls.

Mephisto and Hela worked together under Thanos' orders to free all the caged villains at Avengers Academy and steal weapons and artifacts from the Academy vaults. Hela collaborated with Mephisto to defeat Thanos.

Kilgrave unsuccessfully attempted to take control of Mephisto's mind. Mephisto offered Kilgrave a deal to work for him.

Mephisto and Kingpin worked together under Thanos' orders to free all the caged villains at Avengers Academy and steal weapons and artifacts from the Academy vaults.

Mephisto offered to help Madame Gao escape from her cell if she showed him how to enter the gateway to K'un-Lun.

Mephisto made arrangements to help Proxima Midnight avoid imprisonment in a cell.

Satana's father brought her to Mephisto to be trained in the use of her demonic powers. When she tried to leave, he refused, trapping her in Hell.

Thanos ordered Mephisto to work with the other caged villains at the Academy to orchestrate a jailbreak and steal artifacts. When Thanos invaded Midgard, Mephisto betrayed him by working with Nick Fury to trap him in the Darkforce Dimension.

Artwork of Mephisto from the World News Teaser.

Mephisto's Cell
Add a photo to this gallery 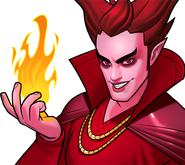 Add a photo to this gallery
Retrieved from "https://avengers-academy.fandom.com/wiki/Mephisto?oldid=56523"
Community content is available under CC-BY-SA unless otherwise noted.